What did Louie Anderson die from?

NBA Star, Tristan Thompson is still in court with his alleged baby mama, Maralee Nichols. They are still on their paternity face-off. As it stands, a lot of revelations are coming forth.

According to documents filed by Tristan Thompson, he revealed that he has a secret Snapchat account with ‘blkjesus00’ as username which he uses to chat with Maralee. He revealed this when talking about his sexual relationship with the personal trainer who claims he fathered her baby.

In a court document obtained by Daily Mail, dated, December 8, 2021, the basketballer admitted that while in a relationship with Khloé Kardashian, he still used this secret Snapchat handle to arrange hookups with Maralee Nichols.

He said in the filing;

“We never had any telephone calls, emails, nor did we exchange text messages. We only communicated via the Snapchat application.

“My username on Snapchat has always been ‘blkjesus00.’ We used Snapchat to communicate to protect our privacy.”

Tristan added that the reason why he chose Snapchat as their mode of communication was because of the privacy it gives. He noted that all messages automatically get deleted after they are read.

He went on to claim that Nichols had “fabricated” a leaked screenshot of a Snapchat message in which he purportedly urged her to get an abortion.

There is a screenshot circulating on social media which is allegedly the chat between Tristan and Maralee where he was alleged to be telling her to get an abortion.

READ ALSO👉  How Much Is Betty White’s House Worth? Photos & Video

“You know how I feel. My feelings haven’t changed at all. Won’t be involved at all. Btw if you think having this baby is gonna make you some money. It’s completely wrong,’ the text message allegedly sent by Thompson reads.

‘You are aware that I’m retiring after this season. So in terms of support it will be whatever is required monthly or someone who’s unemployed. It’s texas (sic) so it will be only a couple hundred dollars. So you better off taking this 75k I’m offering cause you won’t get nothing near that with having a kid with a father who’s unemployed.’ “ 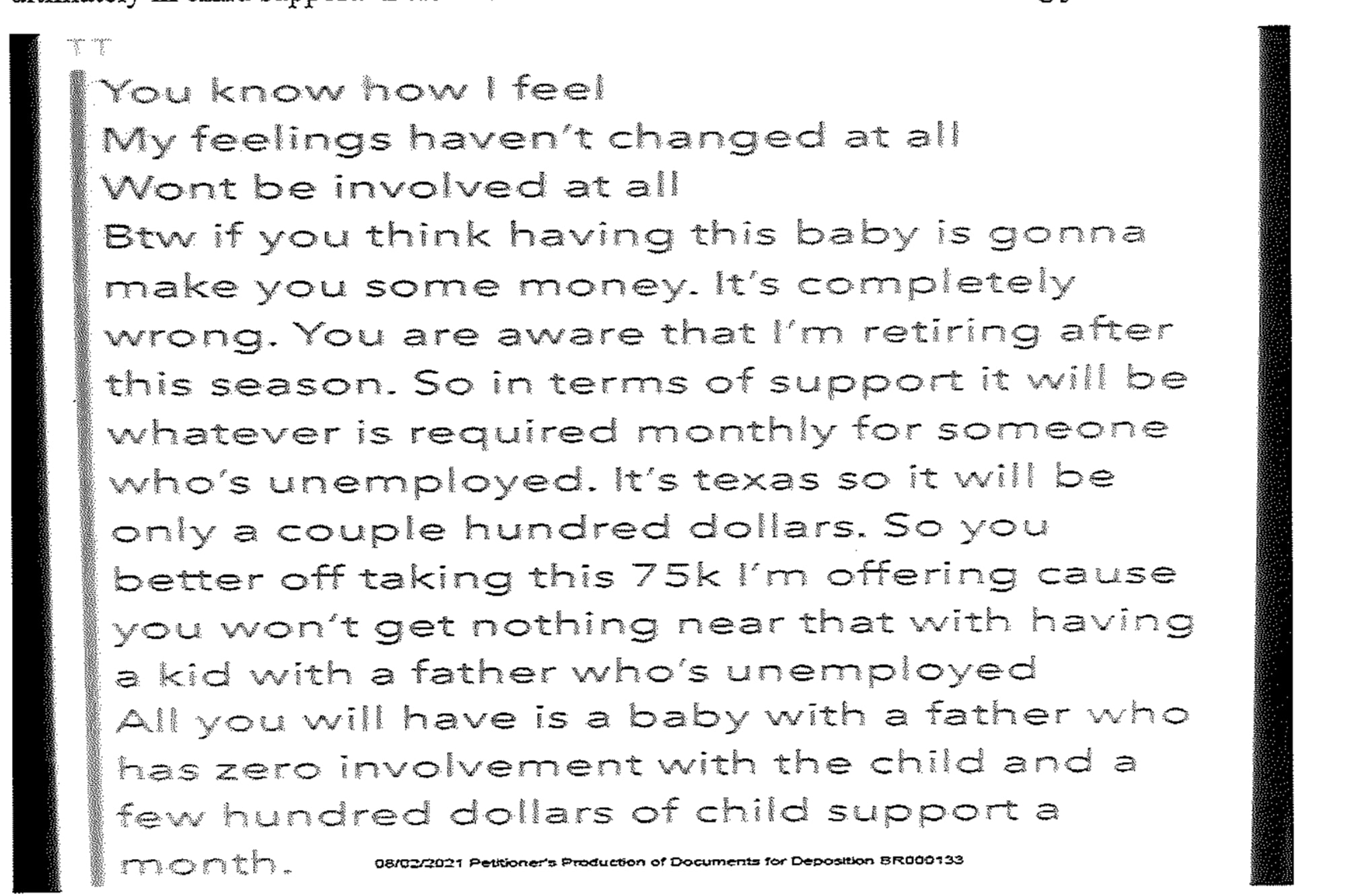 While Nichols has sued Thompson for child support while claiming they had a five-month affair that resulted in her becoming pregnant, he has repeatedly demanded a paternity test and denied that the child, who was born on Dec. 1, is his.

The athlete said in the declaration obtained by the Daily Mail that he met Nichols “in late November 2020/early December 2020 at someone’s house” but did not foresee “any type of relationship” with her because he lives in California and she is based in Texas.

“[Nichols] constantly used the term ‘hook up’ to describe our relationship which was the reality.

“I am certain that if the child is deemed to be my child that the only date of conception was March 13, 2021, because it was my birthday.”

The NBA star was still in a relationship with Kardashian, 37, at the time of the hookup.

Thompson previously cheated on Kardashian in 2018 while she was pregnant with their now-3-year-old daughter, True, and again in 2019 with Kylie Jenner’s then-BFF, Jordyn Woods. The former Cleveland Cavaliers player also has a 5-year-old son, Prince, with ex Jordan Craig.

VimBuzz.com is a website dedicated to bringing you authentic and fact-checked news. We also give you accurate information on the biography, net worth, and anything concerning your favorite celebrities across the world. You can reach us at [email protected] Thank you for choosing to read from us. We hope you will come back for any other information. Happy surfing!

What did Louie Anderson die from?

Meatloaf singer health: What diseases did Meat Loaf suffer from?

Zex Manatsa cause of death

Pastor Mike Todd spit video: Watch how he spat into the face of a man in his church